Since 1981, September 21 has been recognized all around the world as the International Day of Peace. People get together to share their ideas about how to make their lives and our planet a more peaceful place. Here at Eiwa this past week, students in the first year of high school and second year of the global course spent time in class thinking about what peace meant to them and creating “messages of peace” which were then displayed throughout the school and shared with other students. Some students featured quotations in their artwork by such famous figures as Mahatma Gandhi and former Nobel Peace Prize winner Elie Wiesel; others created personal expressions in English of their own beliefs. As always, I was very impressed by the creativity shown by our students in their work in addition to being moved by the thoughts and hopes they expressed.

In keeping with this topic, the theme for this month’s English Day, held on September 25, was “Peace.” Stuart introduced the well-known Biblical verse from the fifth chapter of Matthew which begins, “Blessed are the peacemakers.” An English hymn, “All Things Bright and Beautiful,” was sung and then Stuart spoke meaningfully about how peace can really begin with small actions in our daily lives, such as smiling and thanking others. I was reminded of a quotation by Mother Teresa which many of our students had also been inspired by: ‘Peace begins with a smile.’ 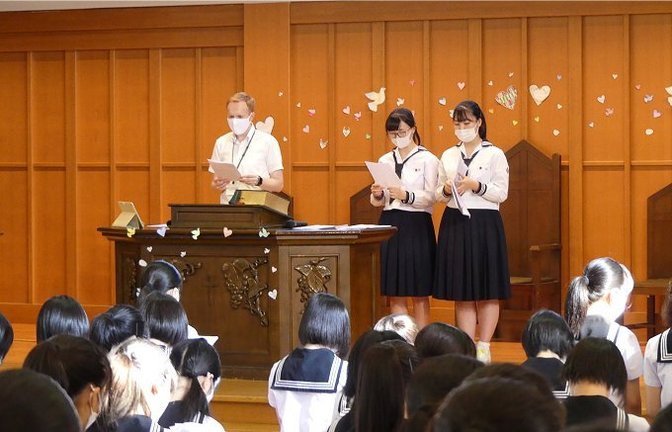 If you have time, I would encourage you to check out this short video montage of our students’ messages and artwork and think about how you too can spread the message of peace. It can be hard to look at the news these days and not feel discouraged by what we see and hear. Many of our leaders seem to push the idea of ‘’my country first’’ rather than “our world first.’’ Nevertheless, I do believe that positive change is not only necessary but also possible. Growing up I would never have believed that apartheid in South Africa would end, or that the warring sides in Northern Ireland could reconcile, or that the Berlin Wall would ever come down. But they did. And other things can and will change, too. It all begins with the first step which, for me, is talking about the issues. Shalom.